Recently it has been noticed that Wirt Walker, a 9/11-insider trading suspect who ran security for several of the impacted facilities, now works with men who were, prior to 9/11, key players in national defense and terrorism response. Given the role that Stratesec played and the relationships between suspects already revealed, this seems more than coincidental. Moreover, these men have top-secret clearances, which further suggests that Walker is a covert operative.

Walker, the son of a CIA and DIA operative, was managing director for the Kuwait-American Corporation (KuwAm). This led to his management of Stratesec as well as other KuwAm subsidiaries that have surprising connections to 9/11. Stratesec had contracts to provide security services not only for the World Trade Center (WTC), but also for United Airlines, which owned two of the planes hijacked on 9/11, and Dulles Airport, where American Airlines Flight 77 took off that day.

Walker’s employee Barry McDaniel, the Chief Operating Officer of Stratesec, went from providing security at the WTC to starting a business with one of Dick Cheney’s closest colleagues. The fact that McDaniel is now working with an old partner of Cheney, who as vice president on 9/11 oversaw the failure of the nation’s defenses, raises many interesting questions.

The same kinds of questions can be asked about Walker’s current coworkers. Today, Walker runs Ecohawk Tech Services, an “applied technology company.” The company shares the same address in Leesburg, Virginia as Walker’s other company, Vortex Asset Enhancement. And as with the many other firms registered by Walker, it’s not really clear what the company actually does. 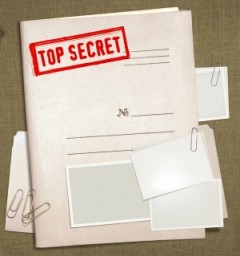 The only other director of Ecohawk Tech is David W. Hearding, a former military officer. Like other associates of Walker and McDaniel, Hearding has a top secret/SCI security clearance, sometimes called “above top secret.” Why Walker and McDaniel, presumably simple businessmen, are associated with so many secretive individuals can only be guessed.

Until August 2001, Hearding served as the liaison between the commander of U.S. Strategic Command (STRATCOM) and the Joint Staff Office of the Secretary of Defense. Just weeks after Hearding left for a job at SRS Technologies, his STRATCOM office was in the midst of coordinating coincidental military exercises, President Bush’s flight on 9/11, and dispatches of the “doomsday plane.” It appears that, due to the exercises, STRATCOM experienced communications problems and confusion that hindered the air defenses.

In the years before and after 9/11, Lejeune contributed to several books on terrorism and was considered to be among the nation’s foremost experts. One of his books included a chapter from George Tenet, who was director of the CIA on 9/11. Another contributor to the same book, which had a photo of the smoking WTC towers on the cover, was Michael Sheehan, National Security Council advisor to George H.W. Bush and Bill Clinton. Lejeune’s chapter in the book quoted 9/11 suspect Brian Michael Jenkins as saying, “Terrorists want a lot of witnesses, not a lot of dead.” Jenkins, who designed the WTC security system that Stratesec implemented, is also known to have a history with Miles Kara, who produced the ever-changing stories about the air defense failures on 9/11.

Another surprising thing about Walker’s new partner Lejeune is that he was the Director of Emergency Planning and Response for New York City. From 1978 to 1982, Lejeune ran the City’s emergency response office that later evolved into the Office of Emergency Management under 9/11 suspect Rudy Giuliani. Of course, Lejeune holds top-secret security clearances too so it’s unlikely that he can say much about it.

Lejeune has worked with many of the military contractors that benefited from 9/11. He has also worked directly with the Department of Defense, Department of Homeland Security, and U.S. intelligence communities. Additionally, he is a Fellow at the Potomac Institute for Policy Studies. Coincidentally, one of Lejeune’s fellow Fellows there, former SEAL Ken Hamilton, “served as the Air Defense Officer reporting to Commander, U.S. Second Fleet in response to the terrorist attacks of 9/11.”

Walker and Lejeune have other coworkers at Eigerhawk but it’s difficult to find out much about them. It’s almost as if they were trying to keep a low profile. For example, Aharon Zer, an Israeli financier, is said to have “managed the United States investment activities for an international private business, investment, and trading company.” That seems intentionally vague and therefore details about Zer and his past should draw the attention of 9/11 researchers.

The directors of WTC security companies were an interesting bunch, to be sure. People may remember that Terry McAuliffe, current governor of Virginia, was a director for a WTC security company. However, considering Stratesec’s role “up to the day the buildings fell down,” as McDaniel attested, its leaders and their colleagues are of most interest. Since Walker’s new business partners Hearding and Lejeune have strong links to organizations that were impacted on 9/11, as well as top-secret security clearances, investigators should seek more information about them. If another major terrorist attack occurs, it should not be surprising to find many of the same people in the vicinity of the crime.
at 10:00 AM