Kevin Barrett 2017 “Pure Kevin from the Left Out Forum”

this document took over 20 years of detailed work.  it's branches are about Jose Arguelles and DreamSpell.  it's roots are in the Mayan Calendar.  It's scope is no less than eliminating the Gregorian calendar and returning to the ancient and accurate solar four seasons calendar. 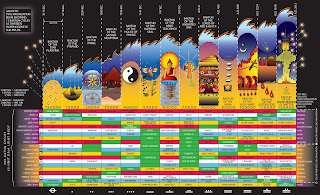 from this work, it now becomes clear why 2012 seemed like such a dud.  from seeds planted by Jose Arguelles, recent analysis of fractal timing shows 2017 as the time most likely to start the clock.  the solar eclipse crossing america is on august 21, 2017, 5 Seed in traditional Mayan calendar.

there is more to come in tidying up the last chapter, but suffice it to say, star seeding has occurred.  (see baktun map p.12)

the tzolkin has no leap days and can therefore accurately predict the venus cycle and will continue to count the days forever.  the first baktun of the star planting is beginning. now is time for the seeds (we have prepared ourselves to be) to take root.

your comments are welcome and encouraged.  please pass on...

Your Mayan Birthday
Digging our way out of history has been a long, arduous process.  But along the way we have also been uncovering, discovering, recovering and rediscovering many song lines of this beautiful blue-green planet

We walk unencumbered into the vast unknown of the ever-creative-now
at 6:42 PM No comments: