By Prof Michel Chossudovsky
Global Research, April 13, 2015
Url of this article:
http://www.globalresearch.ca/saudi-arabias-alleged-involvement-in-the-911-attacks-red-herring/5442545
More bluff and bluster attempts about
the fact that the 9/11 attacks
were a carefully organized False Flag event
and to slow the
full prosecution of all people involved,
and make full and fair reparations for all harms
done at 9/11 and resulting from this grand false flag killing of thousands of people and destroying 3 major buildings.
[A few excerpts of the article are below. See the full article for more details.]
BBC live report of the collapse of WTC building 7, more than minutes before the collapse took place. Building Seven in the background is still intact.
The 9/11 narrative in the mainstream media has taken on a new slant. The FBI is now accused of whitewashing Saudi involvement in the 9/11 attacks.
The alleged Saudi involvement in supporting Osama bin Laden, not to mention the classified 28 pages of the 9/11 joint Congressional inquiry pertaining to the insidious role of Saudi Arabia in supporting the hijackers is part of a propaganda ploy.


When the report of Joint Congressional Inquiry into 9/11 was released in December 2002, it was met with considerable skepticism. That skepticism grew for a period of time but then was reduced to speculation about what was contained in the 28 pages that had been redacted by the Bush White House.
Various U.S. government leaders have since suggested that the missing 28 pages point to Saudi Arabia’s complicity in the 9/11 crimes. However such musings fail to discuss other important issues, like the links between the Saudi regime and the Western deep state, or the fact that, from the start, even the Saudis were calling for the 28 pages to be released. Discussion of the missing 28 pages also omits mention of the highly suspicious nature of the Inquiry’s investigation and its leaders. (Kevin Ryan, The 9/11 Joint Congressional Inquiry and the 28 Missing Pages, Global Research, March 14, 2014

Calling for the official release and publication of the 28 page classified section of the joint inquiry report pertaining to Saudi Arabia is an obvious red-herring.

The objective is to confuse matters, create divisions within the 9/11 Truth movement and ultimately dispel

which was used to declare war on Afghanistan as well as usher in sweeping anti-terrorist legislation.

Both the Congressional inquiry as well the 9/11 Commission report are flawed, their objective was to sustain the official narrative that America was under attack on September 11, 2001. And Graham’s role in liaison with the CIA, is “damage control” with a view to protecting those who were behind the demolition of the WTC towers as well sustaining the Al Qaeda legend, which constitutes the cornerstone of US military doctrine under the so-called “Global War on Terrorism”.

Without 9/11 and the “Global War on Terrorism”, the warmongers in high office would not have a leg to stand on. In turn, 9/11 Truth is an encroachment which undermines war propaganda and the US-led campaign of Islamophobia, which is sweeping the Western World.

Read the full article here:
http://www.globalresearch.ca/saudi-arabias-alleged-involvement-in-the-911-attacks-red-herring/5442545
at 8:48 AM No comments:

On Alison Weir's Book - Under Attack With News & History Suppression 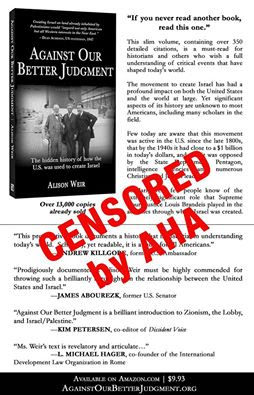 While I have always been puzzled at why Americans endorse the existence of a religious and therefore discriminatory nation, Israel, and at why we give more of our tax-money to that nation than to any other; and while I would not pretend to be an authority on those matters; I was stunned on 31 March 2015 to read a news report at counterpunch, “American Historical Association Censors Ad for Book on Israel, Palestine & the US Keeping ‘Hidden History’ Hidden,” by Alison Weir, someone I’d never heard of before. She says there that AHA refuses to accept a paid advertisement for her historical book about the U.S.-Israel relationship — a historical matter that I have always found puzzling, and so was curious to know more about.


I write a lot against censorship in America’s ‘news’ reporting, but this matter concerns censorship in my own main profession, which is history (I’m only secondarily a journalist), and so it especially piqued my interest.

So, I clicked onto the link there to her book, Against Our Better Judgment: The Hidden History of How the U.S. Was Used to Create Israel, in order to see for myself what this was that AHA refuses to allow to advertise. I saw that the book, which was published a year ago, already has 216 customer-reviews, but none of the positive ones I saw there is very informative about what particularly interests me — the degree of accuracy of the author’s sourcing and allegations. So, I clicked especially onto the one-star, the most negative, reviews, and I saw no one citing a false factual allegation. The negative reviews weren’t any more informative to me than the positive ones were.

So, I clicked onto the inside-the-book, and started reading. I saw allegations that were new to me; and, looking at her footnotes, they seemed to me to be to credible sources.

However, before I would proceed further into this, I wanted to know something more about the author, to find whether she might be an anti-Semite, such as all-too-commonly are writing against Israel.

I came upon this youtube presentation by her, “TalkingStickTV – Alison Weir – The Hidden History of How the U.S. Was Used to Create Israel.” In that hour-long talk, she explained how her interest in the issue of Israel and the Palestinians had arisen starting in 2000, and she showed photos that she took in Gaza. She described the circumstances of her having gone there, as a journalist, to see the situation for herself. Nothing about her suggested to me that she was any sort of anti-Semite, or bigoted in any way. She went on to summarize the main evidence on which her book relies, all highly respected sources, such as this, which not only is a respected scholarly source, but the footnotes in it are likewise respected and mainstream sources. Basically, in her hour-long video talk, she made her case.

By now, I feel confident that AHA’s refusal to accept paid advertisements for her book is an outrage. I happen not to be a member of that association; but, if I were, I would quit in disgust. She is a historian; they are not.
For such ‘historians’ as those to be teaching ‘history’ at American colleges and universities is scandalous — evidence of a profoundly corrupt academic profession.

Alison Weir has a lot to teach American ‘historians.’ We should welcome her to teach it to us, not prohibit her from advertising her book to us.

Incidentally, I found her video talk to be highly informative — and not only about her, but, more importantly, about Gaza, Israel, and our own profoundly corrupt country.

Investigative historian Eric Zuesse is the author, most recently, of  They’re Not Even Close: The Democratic vs. Republican Economic Records, 1910-2010, and of CHRIST’S VENTRILOQUISTS: The Event that Created Christianity, and of Feudalism, Fascism, Libertarianism and Economics.
at 4:01 PM No comments: